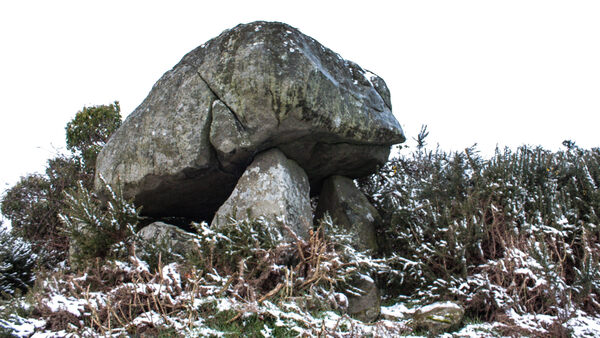 County Down has an abundance of ancient standing stones, with this a rare example in the north of the county, sited not far from Strangford Lough, with views of Scrabo Tower, and close to the sprawling, modern, Ballybeen housing estate.

This particular example, known as the Kempe Stones, or occasionally Greengraves, is a portal tomb or dolmen. The name Kempe Stone may derive from the Norse word Kampesten, which means big stone or prehistoric tomb.

It features two large upright stones, along with smaller supporting stones, topped by a large rounded capstone. The whole thing is some three meters in height. Around the site are traces of a cairn, a burial chamber, which has long since been ploughed out. In the 1830s, archaeologists found bones and pottery at the site.