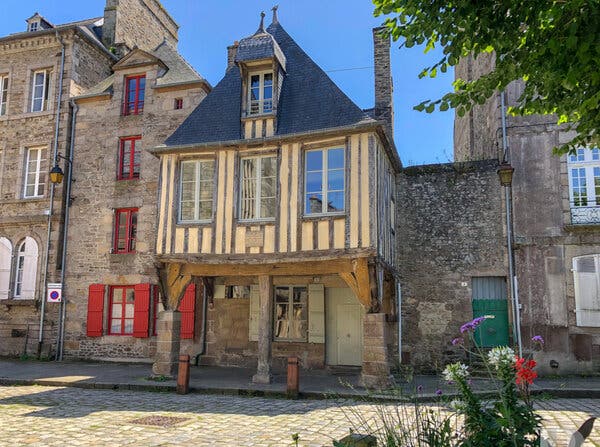 This Medieval six-bedroom home sits on a quiet cobblestone alleyway in the walled Breton town of Dinan, in northwestern France. The property comprises two conjoined buildings — one dating from the 15th century with an enclosed timbered-frame porch that extends over the main entrance, and the other with a pediment dormer and red shutters and trim.

Called La Maison Pavie, the 2,900-square-foot property was once the home of the French diplomat and explorer Auguste Pavie, and has been operating as a bed-and-breakfast for about a decade, said Béatrice Viel, a regional partner with Patrice Besse, which has the listing.

Above the entrance to the four-story granite masonry-and-stone buildings, the centuries-old porch has three large symmetrical windows topped by a dormer with a slate-tiled bell roof. The entire dwelling was renovated in 2010, though an original staircase to the top floor and an old latrine were preserved.